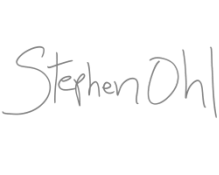 I was the youngest of three boys, so, when my brothers started school before me, I spent a lot of time alone. I got used to living in my imagination, and my mom encouraged it. She was a storyteller herself. I spent many days pretending to be my favorite onscreen personas. But I would literally become them in my mind. My parent’s friends would say, “Hello, Stephen.” And I’d reply, “I’m not Stephen. I’m John Wayne.” They feared I was delusional, but my Mom let it run wild.

As I got older, I grew out of that, or I guess I adapted to social environments. I left the dream of acting and making movies for the safe idea of business. But when I got to Boston University as an undeclared student, something clicked in my mind. Why waste any day doing something you don’t love? All you have is today. So, I set my major as Film and TV. I got a crappy handy-cam, a photography tripod, a friend, and started making my first short film. Since then, I’ve created as much and as often as I can, because I believe creating is the meaning of life, or at least it makes life bearable.

After undergrad, I helped my brother run a small video production company out of our parent’s basement in New Jersey for a couple of years. Eventually, I had to get out of my childhood home, so, I got on a motorcycle and headed to Los Angeles to focus on acting for a little while. I spent two years studying acting and auditioning. I had acted in a couple of indie features, and I thought that ball would keep rolling, but the opportunities for an actor can be difficult to come by. This ultimately pushed me back into creator mode, and I made a POV short film, “I Wasn’t Me.” This film helped me apply to grad school at the American Film Institute Conservatory. The film was a turning point for me, and it’s still playing well on youtube.
​
AFI was a good experience for me. I do well with academic environments, structure, and competition. So, I enjoyed it despite the intense hours and heavy debt it’s put me in. And because of AFI, I was able to meet many collaborators who I went on to direct my first feature with, which I recently finished. It’s a sci-fi/comedy titled “Useless Humans.”